Method Feeders are not just for small fish! 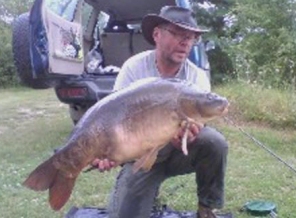 As I posted in my last article, I’ve been having fun this summer targeting other species than carp. Or to put it another way fishing for whatever comes along. This has been specimen fishing but doesn’t seek to exclude fish other than carp. And as you’ll see along the way I’ve caught my share of nice carp too.

I’m fortunate that the lakes hold some cracking fish of many sorts, tench, bream, crucians & rudd as well as our favourite quarry.

In the last few months I’ve found a really excellent and most deadly technique: the Method feeder! The ones I’ve been using are the new(’ish) Drennan Method feeders.

These Method feeders are really an item originally designed with the match angler in mind. They have proved very successful on commercial carp fisheries.
If they have been so effective here, it is certainly because they offer a tight cluster of bait right by your hook bait and do a great job of concealing the hooklink. More often than not I use a small pop up, which once it breaks free from the ground bait wafts in a tantalizing manner just next to the feeder. So far this year, for most species in my lakes it has proved deadly. END_OF_DOCUMENT_TOKEN_TO_BE_REPLACED

I’ve been carp fishing now for over 34 years and have grown and learned with the pursuit, which started a good while before the hair-rig era, and when carping still had a mystique and mystery…

Since I’ve lived in France I have not really fished for any other species, other than a few trips to Spain for the big Catfish. I’m really lucky in that the Croix Blanche venue not only holds big carp and cats, but also a superb head of big coarse fish including tench, crucians, bream, perch, pike and rudd.

So it has been rather refreshing this year to try my hand at catching specimen fish of other species.

It all came about when I met a group of French, former carp anglers, who had reconverted to general coarse fishing and match style methods.  When I met these guys I was on a bit of a roll having had 3 fish over 40lb in a couple of months, the best being a 46lb common, from several venues.
Their approach though, I found fun and refreshing. I must admit the bivvy up style had been boring me a bit for a while, and I found short day sessions fishing traditional boilie methods less than productive.  Also I didn’t really have the time to fish several days a t a stretch, couple with the fact I had a hard job getting a swim on my own lakes. END_OF_DOCUMENT_TOKEN_TO_BE_REPLACED

Why Do Carp Jump?

A question I hear asked regularly by non anglers and novices is :

« Why Do Carp Jump ? »
Now we have all been impressed by the spectacular splashes that a leaping carp can make, especially when a fish over 30lb comes clean out of the water. It is an impressive spectacle and one that gets every carp angler’s heart racing… You know they are there and you’re in with a chance to catch one.

But what makes the fish behave in this fashion?

Best time of the year to go to France

This is a question I get asked frequently and really depends on a number of factors, so there is no single answer that is applicable to all fishing situations.

Weather : I think the number one factor on the likely catch rates of any venue is the weather. As carp are cold blooded creatures they will naturally slow down and feed only sporadically in the colder water. As we’ve seen with winter fishing you can catch fish, but don’t expect to have much action.
The weather and more particularly the sun and its warming effect on the surface layers, can see the fish moving even early in the year. Once the Winter is over the increase in water temperature really is the key to regular feeding and hence more consistent captures. It is worth then getting on Metcheck and keeping a close eye on the weather conditions. Each year is different and often the length and severity of winters is on a cyclical basis.
The same holds true for all the seasons, as once the water gets too hot the fish often go into basking mode and can be see cruising in the upper layers and evidently not the slightest bit interested in feeding. This can often be the case in July and August where many areas of France can see prolonged periods where the temperatures are well into the 30’s.
At the end of the year it’s the same story in reverse. The rapidity with which winter onsets will have a knock on effect to fish feeding. In 2009 we had remarkably mild conditions in November and the fishing remained excellent until winter set in in early December. END_OF_DOCUMENT_TOKEN_TO_BE_REPLACED

Angling – What does it mean to you?

I saw a really nice thought provoking article by UK angler Pat Gillett on the Quest Baits blog. Pat is a long time specimen hunter often turning his attentions to the rivers in his region and their large barbel.

I too think angling and carp angling gin particular has lost its way. Ok I make a living out of fishing, but I’m sure those of us who have been fishing for over 20 years will remember the days when carp fishing had a mythical magic about it.

Fortunately the wonders of nature have not changed and a kingfisher alighting on ones rods is still a marvelous sight.

“ ….I was talking to a mate of mine the other day (a good match angler) and it brought home to me how we all derive different pleasures from angling. To him it was all about the competition and the sheer numbers and weights of fish, obvious really, has this is what is needed to win matches. To me angling pleasure comes from something totally different. After being an angler for over 35 years the need to equate everything to numbers has long since gone. It’s more about ‘just being there’. It’ easy to get drawn into the numbers game and easy to lose sight of why we actually go fishing.

I do like to fish for larger than average fish (for my area) but that only comes from the many years of fishing and thus building my way up from catching smaller fish. To get the most enjoyment I need to be on the right venue and to be catching ‘on my own terms’.

One thing I try to avoid is ‘over pressured’ stretches of river or lakes, unfortunately the presence of bigger than average size fish tends to bring with it loads of fish chasers and swim jumpers and at times a total lack of angling etiquette. I fished one of these stretches (on a small river) a couple of times about a month ago. END_OF_DOCUMENT_TOKEN_TO_BE_REPLACED 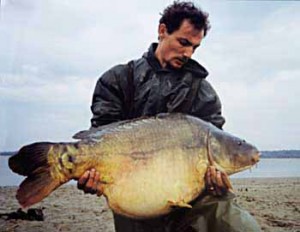 As more and more UK carp anglers venture abroad to France they are confronted with a huge choice of waters and fishing conditions. The giant fish we read about in the magazines, the success stories of leviathan carp all sound very attractive. These fish do exist and the potential of some large waters is outstanding. For this very reason, France has been the number one destination for the travelling angler for a number of years.
Smaller pits and lakes don’t usually pose too much of a problem for anyone who has the usual armoury of techniques and tactics at his disposal, and the usual UK approach will cope without any problem. Those who fancy having a go at one of the big French waters should only do so if they have done their home work and are well prepared for such a venue.

Lakes like the Der Chantecoq, the Foret de l’Orient, Salagou and Madine all hold massive fish, but all are, by English standards very big waters. END_OF_DOCUMENT_TOKEN_TO_BE_REPLACED

I remember sitting watching the lake with another carp fisher and a large mirror swam by us only feet from the bank….we could see clearly that it was a linear carp

‘Look at that!’ exclaimed my companion.
‘How big do you reckon it is?’ I asked
‘Got to be 25lb+” he replied.
I knew from that moment I wanted to catch that fish to see just how big it was.

I had acquired the Croix Blanche Lakes way back in 1999, and during that first year I set out to catch as many of the resident fish as possible prior to a stocking of some 300 plus carp. END_OF_DOCUMENT_TOKEN_TO_BE_REPLACED

Ok! so you have decided to go to France carp fishing in 2010, what should you look for and where should you go?